The 100% owned Rover Project is located 80 km southwest of the township of Tennant Creek in the Northern Territory. The total tenement area is approximately 1,054 km² covering a significant proportion of the Rover Mineral Field 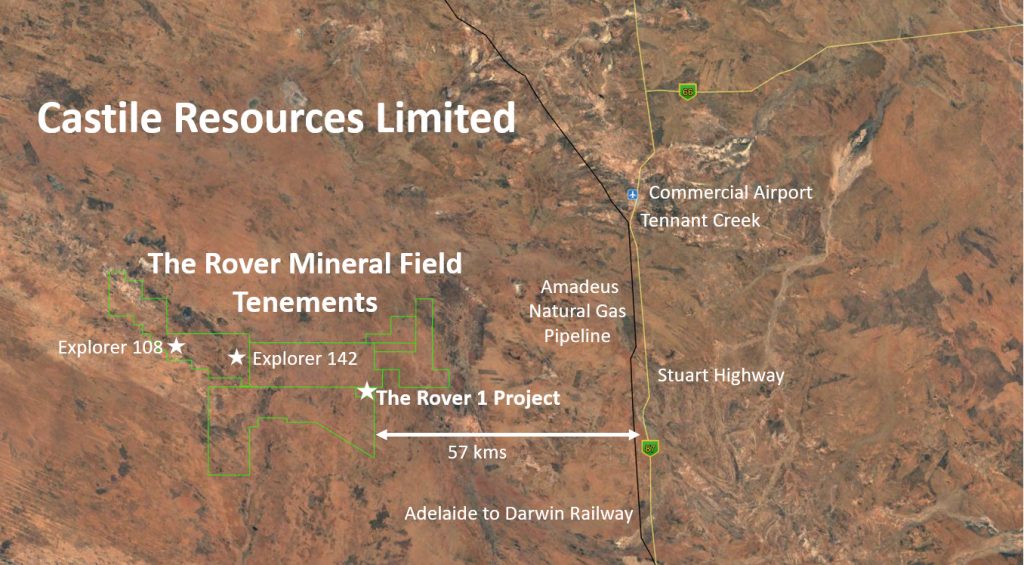 The main mineralisation style within the Project is Iron Oxide Copper Gold (IOCG). This deposit type is known to host large scale economic copper and gold mineralisation such as the world class Olympic Dam in South Australia and Candelaria in Chile.

The Rover Mineral Field is interpreted to be a southern repeat or extension of the Tennant Creek Mineral Field. Tennant Creek IOCG’s have historically produced approximately 157t of gold, 345,000t of copper, 14,000t of bismuth, 220t of selenium and 56t of silver from 130 mines, with the majority of production derived from 12 deposits.

Currently, there are three advanced deposits with mineral resources in the Rover Mineral Field;

The whole Project area is covered by recent sediments which overly extensive flat-lying Cambrian sedimentary units of the Wiso Basin. This basin sequence unconformably overlies the Proterozoic basement hosting mineralisation. The Project area remains under explored outside of the above resources, with numerous targets yet to be fully investigated.

Given the depth of overlying cover over the entire Rover Project area, there is little to be gained by employing conventional grass-roots exploration methods. Instead, initial exploration involved acquisition of high resolution geophysical data. Aerial magnetic and surface gravity surveys were employed to identify subsurface massive ironstone bodies. Historically, these generally coincident anomalies were modelled, ranked and tested by diamond drilling.

More recently, advances in other geophysical techniques have meant that metal potential can be determined and modelled over a number of targets at moderate cost prior to committing to expensive deep drilling programs.

In addition to green field exploration, the Rover 1, Explorer 108 and Explorer 142 deposits all possess open extensional mineralisation and conceptual target zones to be tested.

The Rover Project area is covered entirely by recent sediments which blanket extensive flat-lying Cambrian siltstone, dolomitic siltstone and sandstone units of the Wiso Basin. This basinal sedimentary sequence unconformably overlies Proterozoic basement, with a thickening trend from less than 70 m in the east to in excess of 200 m in the west. Outcrops of the Woodenjerrie Beds, the Junalki Formation (both age correlatives of the Warramunga Formation), the Ooradidgee Group, and the Hatches Creek Group, with minor granite and porphyry, have been mapped about 20 km east of the project area.

The metallogenic model that applies to IOCG deposits of the Tennant Creek mineral field also applies to the Rover Mineral Field. The presence of abundant ironstone and extensive alteration in conjunction with high order structures and associated Cu-Au mineralisation provides indirect evidence that the host rocks of the Rover Field mineral deposits correlate with the Warramunga Formation.

A key driver of IOCG formation globally is broadly coeval major thermal events – generally this manifests as widespread granitoid intrusion. In the case of Tennant Creek this is the Tennant Creek Super Suite associated with the Barramundi Orogeny. Within the Rover Mineral Field, aerial magnetics have identified several intrusive bodies under cover in proximity to favourable stratigraphy. Importantly for the Project, a large 40 x 20km intrusive body is interpreted on the southern tenement boundary

GET THE LATEST FROM CASTILE RESOURCES