The Warumpi Project is located approximately 300 km west of Alice Springs and approximately 500 km southwest of the Rover Project. It comprises three granted exploration licences (EL). The total tenement area is approximately 800 km². All tenements are held 100% by Castile or Castile has the exclusive right to acquire a 100% interest. 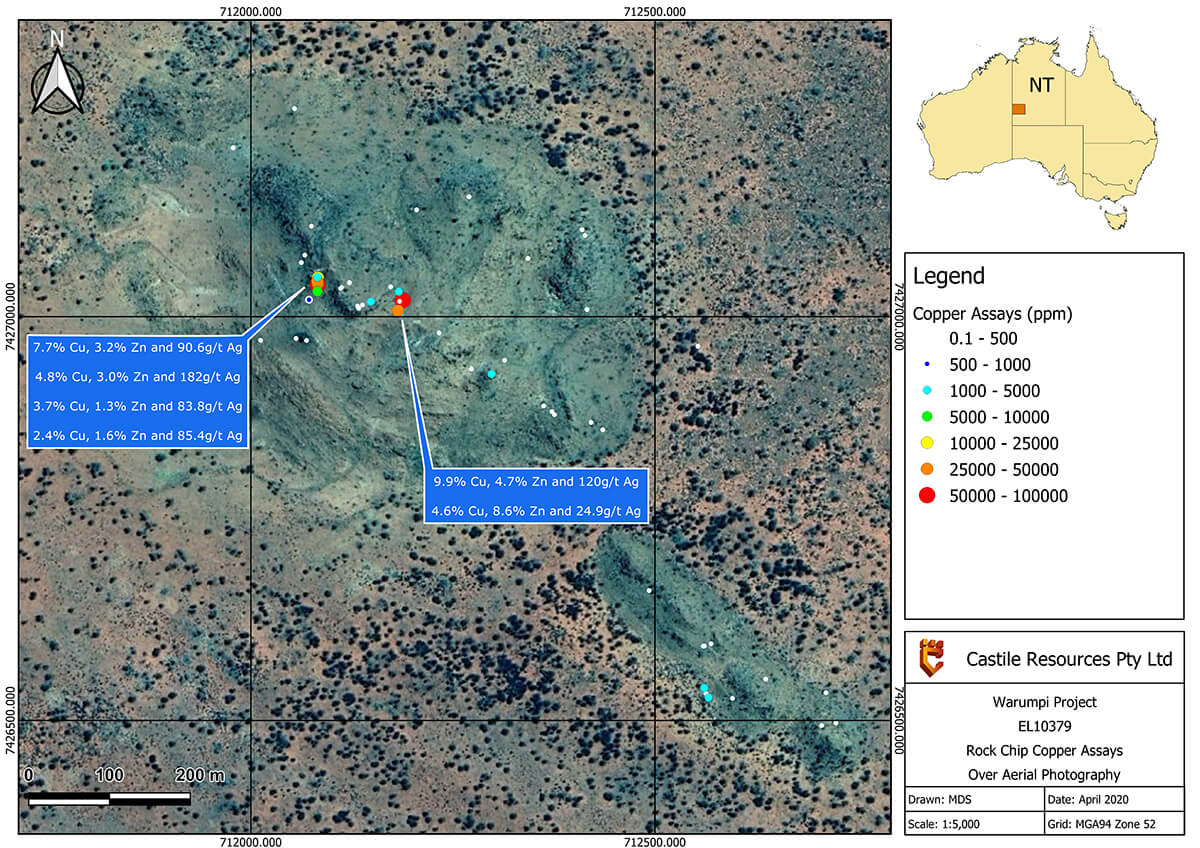 The discovery of high-grade copper-zinc-silver mineralisation at the Huron prospect in the central portion of EL10379 demonstrates the area has the potential to host significant base metal mineralisation. The host rocks show similarities to those at the world class Broken Hill deposit. Follow-up ground and airborne geophysical surveys on the prospect have outlined a highly folded basement complex, with IP surveys identifying multiple anomalies of similar strength under cover, additional to those known from surface outcrop. This prospect is yet to undergo exploratory drilling.

The project area includes a significant proportion of tenure that has only had cursory exploration completed on it in the past. Favorable structures are evident in aeromagnetic images as well as anomalies in various geophysical survey methods. Further on-ground work is now needed to better understand the potential of the area.

Limited historical exploration has been completed throughout the region prior to activities by Castile, due primarily to its relative inaccessibility, harsh arid environment and lack of water sources. Geologically the area is poorly understood due to limited outcrop, weathered profile and a thin veneer of aeolian sands masking vast areas the region.

Between 2011 and 2014 field mapping and surface sampling was undertaken, leading to the discovery of the Huron prospect. The areas was subsequently tested by magnetic and IP surveys.

The focus of on-ground work will be the recently discovered high grade copper-zinc-silver mineralisation at Huron in the central portion of EL10379. The host rocks at Huron show similarities to those hosting the world class Broken Hill deposit and genetic models developed for that deposit will guide Castile’s exploration methodology. Ground and airborne geophysical surveys at the prospect have outlined a highly-folded basement complex, and IP surveys have revealed deeper-seated chargeability anomalies associated with surface mineralisation, as well as additional anomalies of similar strength, scattered within the vicinity of the discovery outcrop. Subject to successfully receiving heritage clearances, an initial drilling program is planned to test the higher ranked IP anomalies at Huron. Further work programs will be dictated by the outcomes of this initial drill testing.

Two high-grade domains dominate the Warumpi Province; the Yaya Domain, located in the northern portion and the Haasts Bluff Domain located in the south. The Yaya Domain (1660–1640 Ma) consists of psammites, pelite, calc-silicates, felsic migmatites and cordierite mafic granulites, all of which have been intruded by various granite suites of the Papunya Igneous Complex. The Haasts Bluff Domain (1690–1660 Ma), which hosts the Huron prospect, comprises rhyolitic volcanics, metasedimentary schists, amphibolites, orthogneiss, and various suites of granitoid intrusive.

An upper amphibolite facies metamorphic event during the Liebig Orogeny (1640–1635 Ma) affected the region, while the Iwupataka Metamorphics were unconformably being deposited.

GET THE LATEST FROM CASTILE RESOURCES